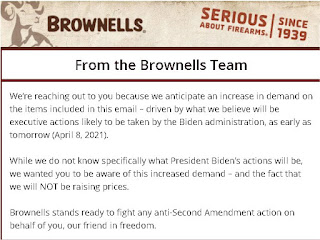 Contact your Representatives and Senators and let them know this assault on the Second Amendment is over reach by the Current Administration and needs to be curbed.

It is a sweeping package with the following executive actions that appear designed to avoid being mired down on Capitol Hill:

The Justice Department, within 30 days, will issue a proposed rule to help stop the proliferation of “ghost guns.” The administration claims “criminals are buying kits containing nearly all of the components and directions for finishing a firearm within as little as 30 minutes and using these firearms to commit crimes.” Biden-Harris lament that such firearms “often cannot be traced” because they lack serial numbers. Biden wants the Justice Department to issue a proposed rule to stop this.

The Justice Department, within 60 days, will issue a proposed rule to make clear when a device marketed as a stabilizing brace effectively turns a pistol into a short-barreled rifle subject to the requirements of the National Firearms Act. The Colorado shooter used such a gun in his rampage last month. Many disabled shooters use such devices legitimately.

The Justice Department, within 60 days, will publish model “red flag” legislation for states. Red flag laws have been debated ad nauseum, with gun rights activists contending they can be abused. Biden wants Congress to pass a national “red flag” law, and legislation providing incentives to the states to adopt their own laws.

The Administration is investing in evidence-based community violence interventions. This is in response to a homicide spike during 2020, and Biden-Harris will take the following steps: