Media blinded by their own bias

Should I shout "The Media is Biased, STOP THE PRESSES?"

I sure don't need to. The fact that the main-stream media reports what benefits THEM is pretty much a big joke. Everyone knows that the MSM has little integrity. Anyone with at least half a brain. That they report stories made to support their left leaning agenda doesn't surprise anyone. They are the propaganda wing of liberal/socialist politics.

So this story, provided to me by Maura at Clean Eating Eve, was buried because it didn't support the media's agenda to disarm American citizens. 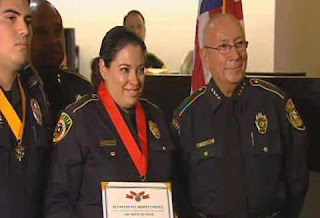 Garcia was finally stopped by an off-duty Bexar County Sheriff's Department officer who was working security at the theater. Officials said the officer, Sgt. Lisa Castellano, heard the gunfire inside the theater and ran towards the sound of the shooting to find out what was going on. Sgt. Castellano spotted Garcia coming out of a bathroom with his gun drawn and fired at him, shooting him four times.


The quote "reporters don't report buildings that don't burn." says it all. Without guns, we are slaves. Without guns, we lose our republic. The government and the media want Americans stripped of their most important right - the right to stop an out of control government.

You could shout it, but no one would listen, sadly.
Thanks for your post and the link.