This is an American Tactical FS40. 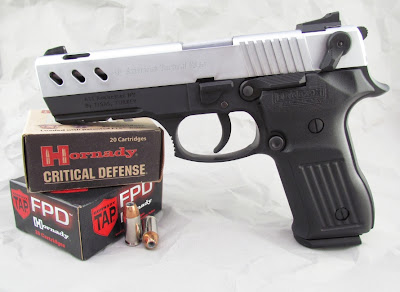 The FS40 is from American Tactical Imports, a relatively new importer at about 6 years old. The full size single/double action auto is a .40 with a round capacity of 12+1. Visually it is, as the website states, "tactical black" with a 4.75" ported stainless barrel and ported slide. There is a mounting rail under the slide ahead of the trigger guard. This gun has an ambidextrous safety. This is another gun with a nice list of features at a low price - $350 MSRP. 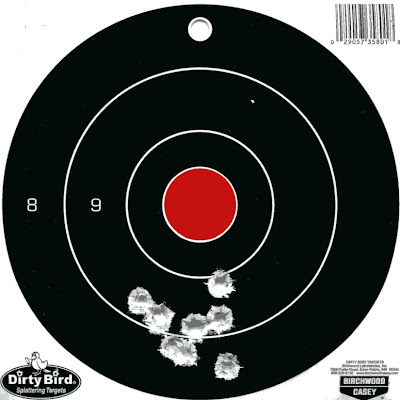 I didn't get "evaluation ammunition" to run through this gun, as the shop was out of .40. I had to use my own. Sign of the times. My guess, too, is that the shop (like most U.S. gun shops) is experiencing issues finding guns and thus is exploring alternate sources.

At the gun range I loaded 10 rounds into the magazine and fired at my target 10 yards away. You can see that the grouping isn't bad, but below center with 2 rounds off of the target completely. The rear-adjustable three dot sights are great to work with and are the type of sight I prefer. After loading another magazine with 10 and adjusting my aim, I was able to put all but one round into the 10-ring. Yes it looks like 8, but two holes are actually elongated from second shots. 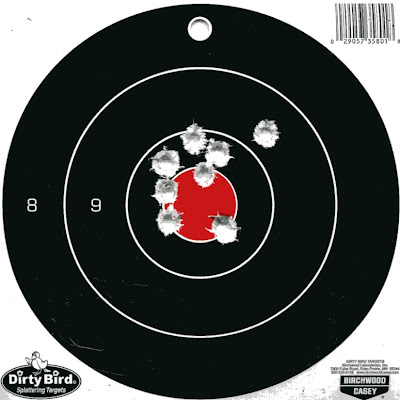 The positives from firing this fill size FS40 are that the gun doesn't have as much barrel flip as other .40s I've fired, likely due to a little more mass at the front end and the porting of the barrel. The accuracy of the gun is likely better than this shooter. The gun is comfortable in a large hand, but be aware that the grip is best for large hands - my wife found that the grip was too big for her. Field-strip take down of the gun for cleaning and then assembly afterward couldn't be any easier. 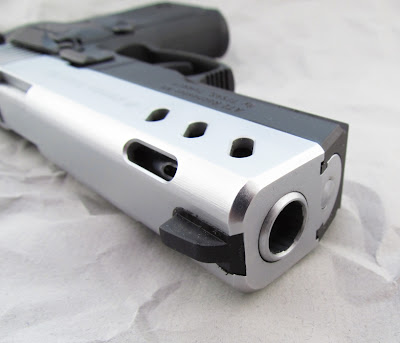 The negatives? After putting about 75 rounds through this brand new gun, I counted three times that the ammo jammed when it didn't slide up the feed ramp. I was using wad-cutter ammo with a flat nose. Perhaps round nose ammo would have been better for this gun. I would think that hollow point ammo would cause the same type of problems so I would need to be more confident in the correct operation of the gun before I would trust it for self-defense. Inspecting the jam showed me that the ammo would bind up just below the feed ramp. If using anything other than round-nose ammo, you would want to see if a gunsmith could trim the edge where the nose of the bullet was getting caught. In 75 rounds there was also a single ineffective primer strike.

Ultimately a good full size gun for a very low cost if the frustrating ammunition feed issues are worked out.

This is the second different gun I've heard about this week that won't load/fire flat nose or hollow points this week... NOT good!